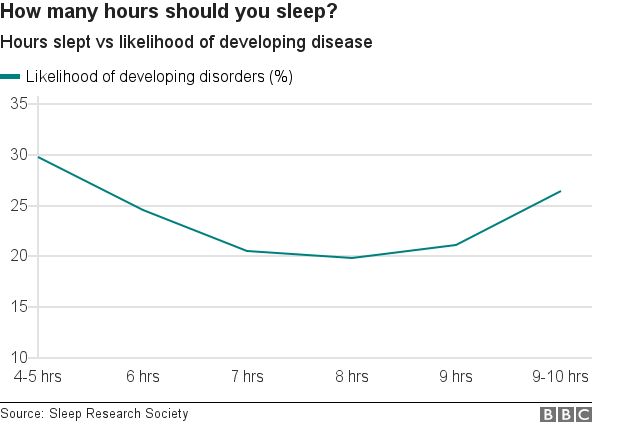 10 things to know about sleep as the clocks go back

How much do we know about sleep and its impact on our lives, from our health and mood, to how long we’ll live?

1. We’re told to get our eight hours

We often hear that we should all be getting eight hours’ sleep a night. Organisations from the NHS to the US National Sleep Foundation recommend it. But where does this advice come from?

Studies carried out around the world, looking at how often diseases occur in different groups of people across a population, have come to the same conclusion: both short sleepers and long sleepers are more likely to have a range of diseases, and to live shorter lives.

Short sleepers are generally defined as those who regularly get less than six hours’ sleep and long sleepers generally more than nine or 10 hours’ a night.

Pre-puberty, children are recommended to get as much as 11 hours’ sleep a night, however, and up to 18 hours a day for newborn babies. Teenagers should sleep for up to 10 hours a night.

Shane O’Mara, professor of experimental brain research at Trinity College Dublin, says that, while it’s difficult to tell whether poor sleep is a cause or a symptom of poor health, these relationships feed off each other.

For example, people who are less fit exercise less, which leads people to sleep badly, become exhausted and less likely to exercise, and so on.

We do know that chronic sleep deprivation – that is, under-sleeping by an hour or two a night over a period of time – has been linked time and again by scientists to poor health outcomes: you don’t have to go for days without sleep to suffer these negative effects.

2. What happens in your body when you don’t sleep enough?

Poor sleep has been linked to a whole range of disorders.

Studies have shown that depriving people of enough sleep for only a few nights in a row can be enough to put healthy adults into a pre-diabetic state. These moderate levels of sleep deprivation damaged their bodies’ ability to control blood glucose levels.

Vaccines are less effective when we are sleep deprived, and sleep deprivation suppresses our immune system making us more prone to infection.

One study found participants who had fewer than seven hours of sleep were almost three times more likely to develop a cold than those who slept for seven hours or more.

There are also links to brain function and even in the long term to dementia.

Prof O’Mara explains that toxic debris builds up in your brain during the course of the day and waste is drained from the body during sleep. If you don’t sleep enough, you end up in a mildly concussed state, he says.

The impact of sleeping too much is less understood, but we do know it is linked to poorer health including a higher risk of cognitive decline in older adults.